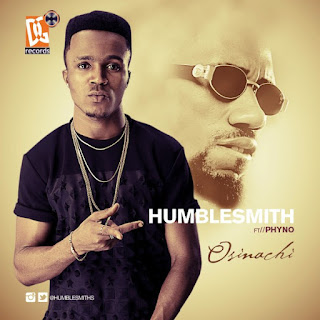 Clear the airwaves, don’t book your artistes yet, for Humblesmith – the African Singercologist and Chairmo crooner – has dropped yet another smash! Titled Osinachi, roughly translated as destiny, features the enigmatic Phyno in a blend that sees the two giants of Nigerian music combine beautifully.
Osinachi begins to shine right from the first notes, as the Humblesmith signature we have come to know and love, carries you through, weaving the philosophical undertones into the rich guitar strings and groovy drums.
Following the releases of Chairmo, Na You, Boogati, Shoki and Love Me, Osinachi is the sixth single in a growing list of hits. The song also appears to answer the unasked question surrounding the rise and rise of Humblesmith. His performances at sold-out events and concerts have left music lovers drooling and others asking questions.
Humblesmith has answered that question and given his teeming fans the perfect response with Osinachi.He attributes every success he has enjoyed to God, taking no credit at all. Once again, his humility shines amid his huge talent. It was produced by Mixta Dimz and shows the versatility of the new king of Nigerian music –Humblesmith!
Audio Player
00:00
03:55
Use Up/Down Arrow keys to increase or decrease volume.
DOWNLOAD HERE